SHANGHAI, June 8, 2017 /PRNewswire/ -- Live from the N5 Stage at CES Asia, Last Gadget Standing, produced by Living in Digital Times, once again drew a standing room only crowd who voted using a polling system on WeChat to choose the product they felt was most likely to succeed in the marketplace and transform the industry. The competition, now in its 16th year, and its second in Shanghai, was once again a thrill from start to finish. Who walked away with a year of bragging rights?  Halomini from Shadow Creator, maker of a pair of advanced augmented reality smart glasses with binocular displays, was the winner. The glasses are powered by gesture interaction, computer visual identification, holographic display technology and augmented reality technology. 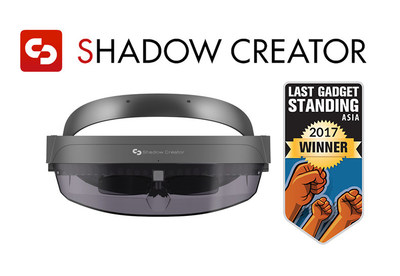 A group of journalists served as early judges to narrow the field down from 50 entries to the final 10.  The live audience, after viewing demonstrations from all of the contestants, voted to select the winner. The winner receives a trophy and a badge to place on their website. Previous U.S. winners include Linksys Velop Wi-Fi mesh router and the Matrix PowerWatch, which is powered by human motion.

"The level of innovation coming out of CES Asia is terrifically exciting," said Robin Raskin, founder and president of Living in Digital Times. "The competitive spirit has always fueled great invention, and every year The Last Gadget Standing provides an entertaining way to look at the range of new developments in the tech arena."